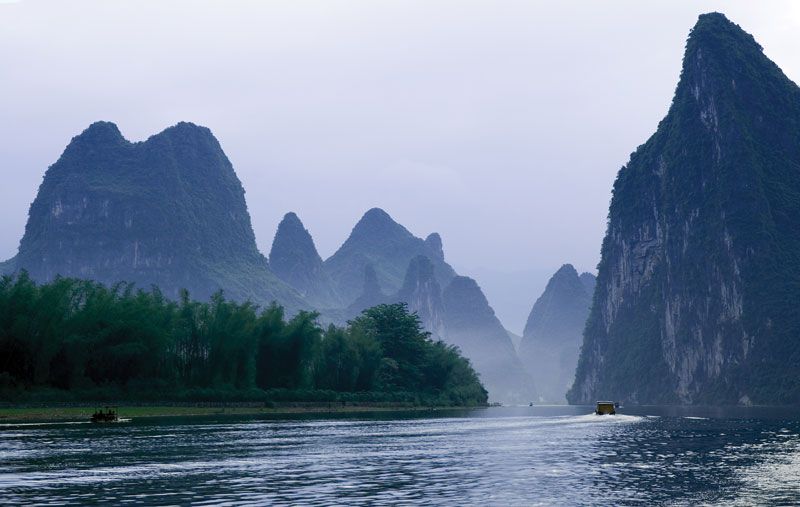 Forests cover nearly one-fourth of Guangxi. Stands of fir, red pine, cedar, camphor, and rosewood are found in the north and west; oranges grow in profusion in the south; while the cassia tree, anise, and betel palm flourish in many parts of the region. The two tree species of the coniferous genus Cathaya are found in the northeastern forests. In central and southern Guangxi, many denuded hillsides have been taken over by tall coarse grasses, which are used for fuel or as pasturage for young water buffalo. Prominent types of wildlife include bison, boars, bears, gibbons (a kind of ape), hedgehogs, and cockatoos.

The population includes Han (Chinese), Zhuang, Mien (known in China as Yao), Hmong (known in China as Miao), and Dong. The Zhuang are found largely in the western two-thirds of the region, while the Han are concentrated in the eastern third. Two distinct Chinese linguistic influences can be noted: Southwest Mandarin is spoken in the Guilin district in the northeast as well as in the north, while Cantonese is spoken throughout the remainder of the region. The Yao, Miao, and Dong settlements are widely scattered.

The Zhuang, a Tai people, have inhabited Guangxi for some 2,500 years. Living on the plains and in the river valleys of the hilly west, they cultivate paddy rice and practice an economy that easily merges with that of the Chinese. They are often referred to as “water dwellers” because their settlements are close to water and their dwellings are constructed on piles or stilts. For two millennia the Zhuang have coexisted with the Han. The Zhuang have absorbed Chinese culture, speaking both their own dialects and Cantonese. A romanized Zhuang alphabet has been created and is one of the four writing systems to be printed on Chinese banknotes.

The origins of the Dong are not clear, but they are generally considered to be a branch of the Zhuang, whom they resemble closely. They live in the high mountains close to the Guizhou border to the north. The Miao and the Yao, however, have long resisted the absorption of Chinese culture. Their languages are distinct and, at most, are only distantly related to Chinese. None of the Hmong-Mien (Miao-Yao) languages were written until alphabets based on adaptations of the Latin script were introduced in the late 1950s.

Upland dwellers who suffer from a scarcity of arable land, the Miao and the Yao practice shifting (slash-and-burn) agriculture. Characteristically, the Miao and Yao settlements are removed from transportation routes and are walled for defense. Besides farming and lumbering, which form the basis of their economy, the Yao make charcoal and bamboo basketry.